This might be true if you add the footnote: *when it boosts our image and raises profits. Many of the environmental innovations at Middlebury are truly useful in addressing environmental problems. However, in efforts to accomplish these marketable projects, Middlebury has often participated in larger processes that contribute to the grand mistreatment of the earth and most of its people. For example, as part of the plan to be carbon neutral by 2016, Middlebury is planning to buy methane gas from a farm and transport it through a new proposed pipeline. To save money on the carbon neutrality project (highly attractive to donors), Middlebury is supporting the construction of a pipeline that will transport fracked gas from Alberta, Canada through Vermont and under Lake Champlain. In case you haven’t heard, fracking = water on fire, toxic chemicals in the ground, and a lot more cancer. Did we mention Vermont residents (including students, faculty, and staff) are overwhelmingly opposed and have been actively campaigning against it? How good is carbon neutrality when it requires Middlebury to throw support behind an undemocratically built pipeline that will continue our dependency on fossil fuels for the next half-century? To learn more, visit this article by Middlebury students: http://wagingnonviolence.org/feature/its-not-easy-being-green-for-middlebury-college/

While initiatives that help grow the College’s endowment are heralded by the administration, student activism that points to the root causes of environmental destruction and hypocrisies like the one just mentioned, are disciplined or ignored. For instance, when students pointed out that investing our billion-dollar endowment in industries that wreak havoc on planet is a bit of a contradiction, the administration showed that the growth of the endowment is more important than our environmental impact. Disciplinary action was taken against some of these students who called themselves the Dalai Lama Welcoming Committee for sending out a fake press release and follow up explanation reminding the campus that,“our complicity has on-the-ground implications: US-made weapons fueling the drug wars in Mexico, drone attacks killing civilians in Pakistan, and the Keystone XL pipeline threatening communities from Canada to the Gulf.” Demands for divestment from fossil fuels and war manufacturing grew along with similar divestment efforts around the country, but were rejected by the administration last year. To learn more, visit: http://divestforourfuture.tumblr.com/ and http://middleburydlwc.wordpress.com/

Activists have shown that innovation alone will not address climate change, first we have to stop corporate involvement in politics and the consolidation of waste and harmful extraction practices on the lands of indigenous people, poor people, and people of color. Despite our clearly voiced commitment to protecting the planet, the administration doesn’t want to face up to this reality.

Middlebury presents itself as a school with liberal values. However, the academy is an inherently conservative institution. Diversity, political progressivism, and multiculturalism all serve the corporate, profit-driven interests of the college. In reality, there are very few faculty of color (even fewer tenured faculty of color), no multicultural center or paid staff person to address the needs of students and faculty of color, and less than half the student body is on any financial aid. Yes, many Middlebury students are very good at being politically correct. But when not offending people becomes more important than challenging the status quo or the structure of the institution at large, we need to reassess. This is not truly progressive–as in, leading to real change or progress–rather, it conserves the current expectations about who gets to be offended, and how they get to express it. Tolerance of those who deviate from norms is not enough–nor is a society that offers assimilation as the only means of equality. 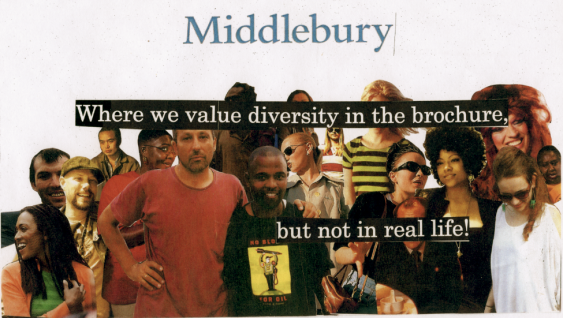 You’ve probably already met some pretty cool people. We think our friends are exceptional, too. But we have some doubts about the line we are constantly fed that all Middlebury students are individually outstanding- the “best of the best.” Meritocracy is not real. We got here because we’re smart and we worked hard, but we also got here because were given access to certain forms of education, and because our learning styles were validated by a particular set of standards that get people into college– like work that mainly tests how well you can take a test. Lots and lots of people are smart, talented, and hardworking who don’t end up at schools like Middlebury- in fact, these schools function on their very elitism, and excluding 85% of applicants is what makes this happen. What’s more, the college functions on educating us with a certain type of knowledge. In this process, other forms of knowledge are easily invalidated- like those that come from lived experience! The thing is, it’s easy to start thinking after your first year here that no one else outside of Middlebury will “get it.” They didn’t take that sociology class that taught you that everything is constructed (even gender?!!), but actually, plenty of non-middleburians, non-elite collegians for that matter, have knowledge that you need. And chances are, the exchange won’t happen if you start off a sentence with, “well according to Foucault…”

Well, shit. So everything sucks? NOT QUITE! This guide will give you some inspiration from the past, and some good things to get involved in now.

View all posts by disorientmidd